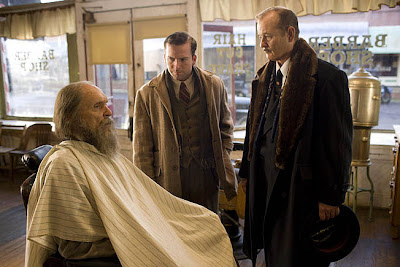 I was bit worried going into Aaron Schneider's Get Low, fearing that an onslaught of backwoods schmaltz and old-age remorse would be in order, but for the most part it's a nice, quaint little character piece - not as insufferable as Guy Lodge says and not nearly as stirring as Rex Reed believes.

A film like Get Low is amiable, sweet and gentle and pretty hard to get riled up about either way. It's a modest, nicely-shot period film about forgiveness and tying up loose ends before we go, and despite an inevitably gooey confessional scene, it handles its subject with minimal syrup and butter - or at least less so than expected.

What the film's success boils down to is Robert Duvall's boffo performance as the mysterious hermit Felix, a man confined to his remote home by his past and conveniently gentler than his reputation. As far as male performances go this year, it's hard to find one better, even if the film around it certainly has room for improvement. [B-]
Posted by Chase Kahn at 12:24 PM