Adapted from the Arthur Larents' 1959 stage musical of the same name, Mervyn LeRoy's Gypsy ('62) is yet another stunning example of lavish widescreen design prominent in the 60's American musical, but on the whole it's a rather tepid, off-kilter film adaptation that mostly works in spite of its musical numbers and lopsided plotting.
- 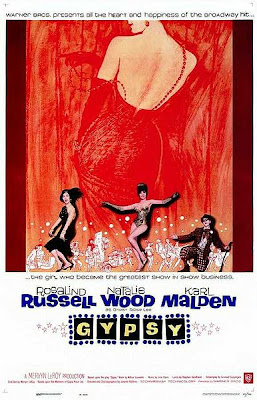 Following a rapidly aging mother (Rosalind Russell) who attempts to drive her two children to stardom via vaudevillian trifles, Gypsy is an acute study of the dogged pursuit of fame, the fine line between exploitation and modesty and finally, the parents who attempt to rewrite their failures and shortcoming through the lives of their children.

Russell is the main attraction here, capturing both the mom-from-hell stage abuse of her two daughters and the sympathetic, desperate longing for glory that has since passed her by. The fast wordplay gives her an excuse to dip into her screwball comedy upbringing and in the twilight of her acting career, she gives one of her best performances.

From the get-go, Gypsy is simply a gorgeous film - John Beckham's art direction, Ralph S. Hurst's set design and Orry-Kelly's costume design are all superb - with the whole package having the widescreen visual punch of a My Fair Lady or a Carousel.

Songs like "Mr. Goldstone, I Love You" and "Dainty June and Her Farmboys" have fun with the film's vaudeville roots and physical playfullness, while "Little Lamb" (sung by Natalie Wood herself) and "You Gotta Have a Gimmick" are irksome.

The film's closing number, "Rose's Turn" threatens to take the film out on an unusually tragic high, with Rose (Russell) taking her turn under the lights, but unfortunately, the film can't stick the landing and a brief, wayward mother-daughter reconciliation spoils the mood. [C+]
Posted by Chase Kahn at 9:21 PM