Ray Enright directed a handful of "B" Westerns at RKO in the late 1940's beginning with an unremarkable farmers vs. outlaws tussle in Trail Street ('47) before bringing back the same key cast members for the more skilled and noir-ish Return of the Bad Men ('48). 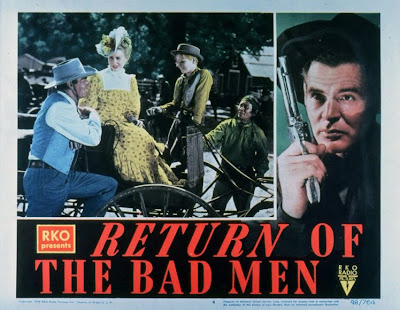 This time Randolph Scott and Robert Ryan are on opposite sides of the law, with the latter playing one of his more cold-blooded and vile roles as the notorious Sundance Kid. (Some other famous outlaws make appearances, like Billy the Kid and the Younger and Dalton Gangs.)

Scott, rather fittingly, plays the open-minded U.S. Marshall pent on enacting his revenge on Sundance and his bank robbers pent on sweeping through the Oklahoma Territory. Among their rag-tag clump of misfits is the beautiful Cheyenne, a woman who tries to defect from the group after she's captured and offered reprieve by the grinning and chiseled Vance (Scott).

If a bit too impaired by its B-movie trappings, the film, like many RKO Westerns at the time (Blood on the Moon for example) was heightened by a brooding sense of style and metaphysical comeuppance that resembles the thematic trademark of classic film noir.

There's certainly traces in the arc of Cheyenne (played by Anne Jeffreys), the bank robber-turned-telegrapher who tries to bury her past with the prospects of her future and ends up paying the price. And certainly in the way cinematographer J. Roy Hunt films Ryan as the be all end all bad guy from hell.

Enright's no slouch, either - just watch the opening bank heist or the quiet, climactic shootout to see trademark examples of ratcheting tension through a measured, cautious approach. Return of the Bad Men isn't and shouldn't be a Western staple, but it's a buried artifact ready to be unearthed by willing viewers. [B+]
Posted by Chase Kahn at 8:52 AM