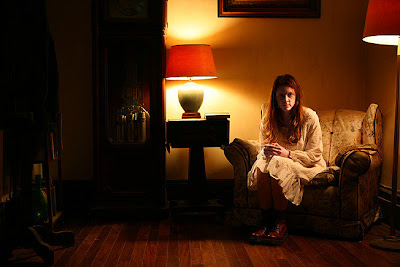 If there's one thing audiences can't get enough of its James Cameron...but if there's another it's the mockumentary horror film - those spooky, micro-budget camcorder frighteners that play the lost-footage game all the way to the end.

The Blair Witch Project kicked it off over a decade ago and the format was revived several years later with [REC] and Quarantine, even going Hollywood with Cloverfield and then generating midnight revenue (and sadly, another horror franchise) with Paranormal Activity last year.

Daniel Stamm's The Last Exorcism doesn't do anything new with its faux-documentary shooting style, eventually fizzing out into irrelevancy, but it's approach to the well-worn exorcist genre and a few convincing scares keep its head above water for a while.

I loved Cotton Marcus (Patrick Fabian), a phony showman and preacher who stages exorcisms for money, and the lingering doubt as to whether Nell (his "last patient") is possessed or not is fun and the filmmakers play off of that doubt pretty well, not necessarily within the audience but within Cotton himself.

There are some neat pathways that the film alludes to (sexual abuse, psychotic disorder, etc.) but mostly the filmmakers simply aren't talented enough to balance all of these potentially gripping ambiguities and too often the truth and the inevitable conclusion are too easily conceived and ham-fisted.

The finale is a backwoods Gothic horror-fart, a coalescence of ideas from other movies that lacks conviction or plausibility or even genuine fear. The only thing dumber is the intuition of Cotton and his two camera buddies who couldn't smell a demon if it crawled under their noses. [C+]
Posted by Chase Kahn at 8:21 AM