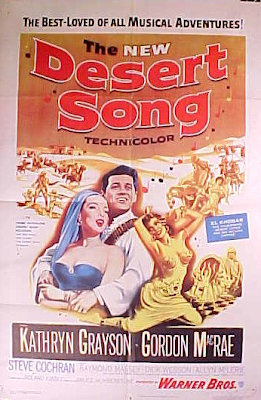 This third screen adaptation of Sigmund Romberg's acclaimed operetta was maligned by critics at the time who found Warner Bros. decision to dip into the well yet again, the epitome of beating a dead horse, they thought.

Well if you've never seen the 1929 version or, to a lesser extent the much more topical 1943 version, Bruce Humberstone's The Desert Song ('53) is a valiant Technicolor charmer. Starring Gordon MacRae and Kathryn Grayson and featuring eight of Romberg's classic tunes, the film is a well-sung adventure film - if a tad low on rousing battlefield adventures, there's plenty of stirring in those high-pitched vibrato melodies.

With original book and lyrics by Oscar Hammerstein II, the film follows the dual personalities of a milquetoast philosopher and his alter ego as the masked, sword-wielding desert rebel El Khobar (Gordon MacRae).

Using both his tactics on the blazing sands and his more mannered approach inside the castle halls, he attempts to strong-arm the evil Sheik Yusuf (Raymond Massey) from provoking an attack alongside French colonists against the desert Riffs, all while wooing the General's daughter (Kathryn Grayson) and singing his way into her heart.

Musicals highlights include a lovely duet in the moonlit palace garden ("One Alone") and of course, the title tune, "Desert Song". It may not approach the poeticism or widescreen splendor of some of Rodgers & Hammerstein's adaptations, but the songs are brilliant - better, in fact - and the film is a sweet if cloying bit of irresistible. [B-]
Posted by Chase Kahn at 10:35 AM