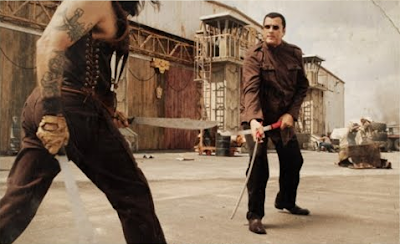 Robert Rodriguez's Machete is a brutal joyride and a bone-crunching tongue-in-cheek masher. It's chock full of the usual Troublemaker Studios shtick - a grungy rock score, hot chicks with guns and a childlike sense of humor, etc. - but like Planet Terror, its spiritual forefather of schlock, the joke runs dry as the threadbare plot continues to unfold into limitless excess.

I've always loved the way Rodriguez frames these intentionally low-rent grindhouse features - the extensive grain, the soft-core pornography, the lurid violence - but he's proven twice now that he simply can't hold it all together for the duration, which is a fault of his own diffusive storytelling and ambitious running-time.

Planet Terror, Rodriguez's nasty zombie-killing first-half of Grindhouse is a much better film but it too bears the marks of Machete's tedious tendency for protraction, an elaborate, overstuffed cast and a weakness for sticking the landing. (The action finale here is such a mess it's embarrassing.)

For the first thirty minutes, you're in Rodriguez heaven - it's gleefully violent, shamelessly skimpy and menacingly hard-boiled - it's just a shame that both he and the film can't recognize when to quit, or how to. [C+]
Posted by Chase Kahn at 7:09 PM