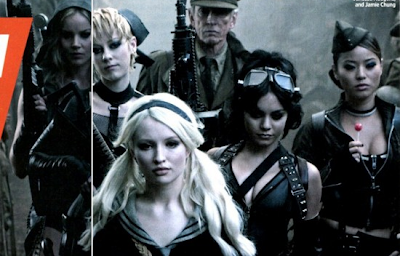 I'm not the biggest fan of Dawn of the Dead, 300 or Watchmen, but Zack Snyder's Sucker Punch looks be his most interesting and most irreverently self-conscious film to date, and I absolutely mean that in a good way.

Snyder is a glorified comic-book stylist and his films are nothing but panels that move from one to the next. 300 embellished a threadbare story out of Frank Miller's graphic novel and then Watchmen was so slavish (with the exception of a few horribly placed songs) that it became embalmed, as David Edelstein put it.

Fortunately, Sucker Punch isn't based on previous materials or writings, it doesn't have a vicious mob of a fan-base and more importantly, it looks and sounds like something entirely senseless and insubstantial in a way that should allow Snyder to just do his thing from scratch and leave any pretensions at the door.