This review by The Miami Herald's Connie Ogle brings up the same sentiments that I have expressed towards Phillip Noyce's Salt in comparison to Inception, which is that both films are big budget actioners skewed toward adults but that the former is more traditional, more streamlined and far less ambitious, for better or worse. 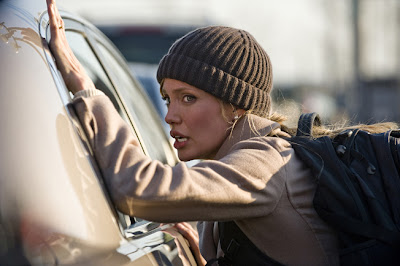 "In a way, Phillip Noyce's film is the anti-Inception; it's never dazzling, but it's never confusing, either. It's a Bourne movie minus the exotic locations and sickening handheld camera, and its head spy has way better lips than Matt Damon."

Where were all these handheld camera bashers when Bourne was, you know, in theaters? I don't seem to remember a lot of bitching three years ago. Anyway, I'll be seeing Salt this weekend sometime after I arrive back in Dallas at the conclusion of a 16-hour drive across the country tomorrow. Yippee.
Posted by Chase Kahn at 5:19 PM