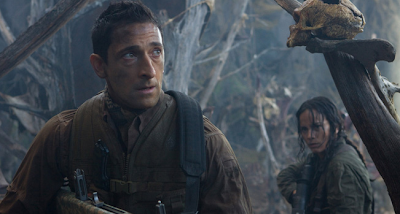 Combining the classic feel of John McTiernan's 1987 original with the modern, sequential trappings of multiplication and convolution, Nimrod Antal's Predators is a charming yet dumb resuscitation - a moderately tongue-in-cheek homage and reverent continuation of its now-classic predecessor.

Beginning with an aerial free fall and the subsequent meet-and-greet with a decidedly eclectic bundle of mercenaries, the film takes its exotic locale action-horror formula and runs with it all the way to its predictably bare-chested conclusion.

Things jump out at you, guns are fired, extraneous plot twists and near-misses abound, but somehow the proceedings are salvaged from complete obscurity by an elusive yet giddy mix of survival, built-in nostalgia and predatory instinct.

It's also carried somewhat by Adrien Brody, whose casting was met initially with curiosity due to his gangly persona, but he's ultimately proven to be an inspired choice - buffed-up, lean and surprisingly menacing.

The supporting cast doesn't fare as well, but the titular beasts are clearly taking second-billing here and they (well, most of them) do their part, although I'm still trying to figure out how Predators is any different from Cristian Alvart's Pandorum. [C+]
Posted by Chase Kahn at 5:59 PM