Judy Holliday turned into a star and an Oscar winner overnight for her role as the sheltered, uneducated and sassy mistress "Billie" Dawn in George Cukor's Born Yesterday ('50). Already a success on the stage, it was her small role in the courtroom comedy Adam's Rib ('49) that helped her seal the role and her place in film history. 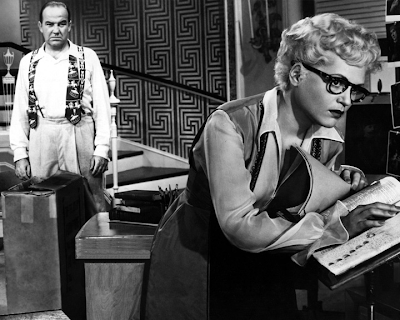 Already a known and dedicated studio filmmaker of "women's pictures," Cukor was the natural selection to bring the Garson Kanin play to the screen after his various ruminations on gender equality (Adam's Rib, Pat and Mike), marital affairs (The Women) and upper-class oppression (Holiday, The Philadelphia Story) that were nevertheless delicate entertainments as well as social comedies.

Born Yesterday may be a tad clunky in its moralizing of a defenseless mistress in the face of domestic brutality and corrupt big business - the film is Capraesque in this regard, with William Holden's idealistic D.C. reporter cleaning up - but ultimately the performance of Holliday wins us over.

Speaking in that squirrelly high-pitched squeal, Holliday will remind viewers of Jean Hagen in Singin' in the Rain ('52), but the difference is that ultimately Holliday necessarily brings heart to her role - I just wish that Kanin and Cukor would leave Thomas Jefferson out of it. [B]
Posted by Chase Kahn at 11:03 AM