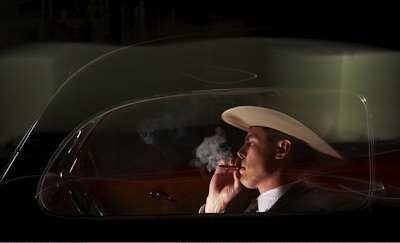 With his scratchy mumble and frail persona, Casey Affleck makes a disturbingly convincing monster in Michael Winterbottom's vicious west Texas neo-noir about a sadomasochistic sheriff's deputy in the 1950's.

Based on the acclaimed 1952 Jim Thompson novel, The Killer Inside Me succeeds as provocative pulp - its hazy, luscious photography and shocking depictions of violence towards women unsettling - but despite the genuine efforts of Mr. Affleck, the films feels frustratingly aimless and chilly, all the way to its silly, surrealistic climax.

What director Michael Winterbottom and writer John Curran seem to have done is simply captured the brutality and the ugliness of their subject, Affleck's Lou Ford, without much insight or emotional response mustered outside of the ability to repel.

We're shown glimpses of Ford's violent past through flashbacks and childhood trauma, but the effect is almost rudimentary. Winterbottom surely knows how to capture the sly mannerisms and sexual animalistic tendencies of his killer, I'm just not sure he understands him, or cares to. [C+]
Posted by Chase Kahn at 8:08 PM