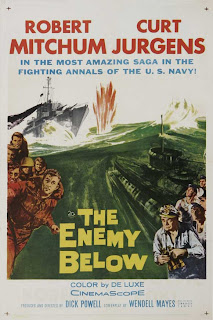 -
A U.S. Navy Captain and a German U-boat Commander go head-to-head in Dick Powell's gripping, refreshingly spare cat-and-mouse game that, like a good portion of war films from its era, is less shameless propaganda and more of a reverent acknowledgement of the sacrifice made on both sides.
-

Robert Mitchum's sly, confident Captain Murrell matches wit with Carl Jurgen's resourceful  Kapitan von Stolberg, but besides sharing expert tactics and an bottomless bag of tricks, both men share an unusual respect for their opponent and a cautious - rather futile - stance towards war.
-
And although the film sparingly resembles The Bridge on the River Kwai's balanced viewpoint and anti-war undertones, any resemblance is only fleeting, for The Enemy Below works best as a straight-ahead sea-faring action film.
-
Shot in CinemaScope and bright, beautiful colors, the film passes the eye test and even took home an Oscar for Walter Rossi's seamless, smoothly-veiled special effects, which accent what is a moderate, lean and professionally-mounted submariner. [B-]
Posted by Chase Kahn at 8:27 PM