Budd Boetticher’s last two films as part of the “Ranown” series both concern themselves with a mixed traveling party of roughnecks, a young lady and the temptation of money and the eventual cost of greed. 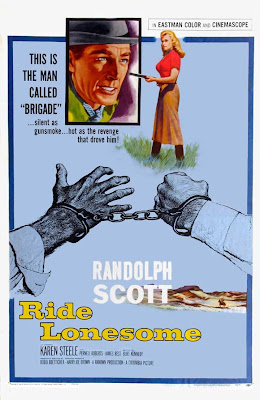 Ride Lonesome begins with bounty hunter Ben Brigade (Randolph Scott) as he captures the outlaw Billy John, vowing to bring him to justice in Santa Cruz. Along the way, he picks up two rivals and a fetching new widow whose motivations are both mysterious and brazenly obvious, all the while on the run from Billy John’s brother, Frank (played by Lee Van Cleef).
Fending off two greedy gunmen with one hand while keeping Frank at bay with the other, the real intentions of Brigade’s treacherous capture of Billy John is – as per usual – not as barbaric as one might expect.
Combining the mixed-company friction of The Naked Spur and the ambiguous, nearly-biblical vengeance of The Man From Laramie, Ride Lonesome may just be the best Anthony Mann western that he never directed – visually sweeping yet thematically gloomy and spiteful. [A-]
Posted by Chase Kahn at 3:44 PM