Perhaps far more minor and far less revelatory than it would have you anticipate, George Clooney's "The Ides of March" is nevertheless a pleasing, bristling suit-and-tie political thriller that serves best as a piece of populist entertainment rather than an indictment on political corruption and treacherous campaigning. 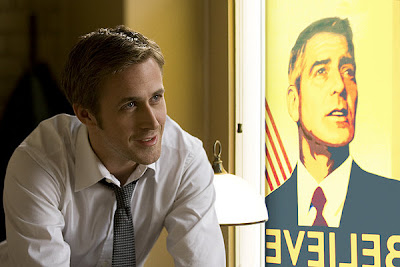 Ryan Gosling's Stephen Meyers, a brilliant, brash and idealistic young campaign manager, is faced with a series of ethical conundrums and crises as he is quickly sucked in under the pressure of a heated Democratic presidential primary, and the film is more and less about how Stephen decides to deal with it.
-
Stephen believes in his candidate, Mike Morris (a sharp, charismatic George Clooney) and is willing to go up to bat for him, even going so far as to say that "he's the one person who can actually change people's lives".
-
The film sets up his disappointment perhaps a bit too noticeably and the third act feels neither genuine nor unforeseeable, yet the film's pleasures lie in its seedy, delectable confrontations and perfidious workplace environments, with experienced, venerable actors delivering pat, singeing dialogue with a delicious pungency.
-
But what stood out amidst all of the backdoor sleaziness and roll-up-your-sleeves dirty work is the brave way that Clooney, co-writing with Grant Heslov and Beau Willimon (working off of his own play, "Farragut North"), essentially washes his hands of his characters and dismisses the notion of simple heroes and villains. [B]
Posted by Chase Kahn at 5:47 PM