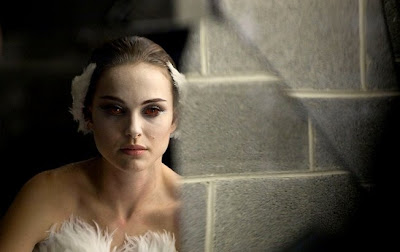 Having just seen Darren Aronofsky's Black Swan again, I can say that it's just as ludicrous, lurid and frantic as it was the first time - which is to say that I can't wait to go back for thirds. I need to sit through those ghastly hysterics and on-stage transformations again and again.
-
Black Swan is a film that exudes craft, authorial ownership and exquisite design, even as the film's erotic, surrealistic undercurrents begin to overwhelm the screen and our unexpecting young dancer, Nina Sayers (a battered and marvelous Natalie Portman).
-
The backstage melodramatics, chilly atmosphere and post-adolescent awakenings are reminiscent of early Roman Polanski or Dario Argento, but the massive, soaring musicals cues and psychological nails-on-a-chalkboard unravellings are pure Aronofsky.
-

And oddly enough, this ends up being the perfect companion piece to The Wrestler, continuing with the director's current fascination with grainy 16mm stock, over-the-shoulder tracking shots and professional self-abuse.
-
The biggest influence here, however, is the way Aronofsky has taken his swiftness in the ring and brought it to the stage. The ballet scenes here are simply stunning in their choreography and complexity, swirling and prancing to the powerful swells of Tchaikovsky and never far from the gaze of its star performer, who is more than up for the moment.
-
But the film wouldn't work without Aronofsky's whole-hearted commitment to his world - from spotlight to pointe, he's given us something grandly operatic, concentrated and sublime - something befitting for the stage. [A]
Posted by Chase Kahn at 10:25 PM