I'm sort of obsessed, or rather curious, of any massively ambitious, large-scale silent epic, and so naturally I jumped at the opportunity to see Michael Curtiz's Noah's Ark ('29), when it aired on TCM this past weekend.
- 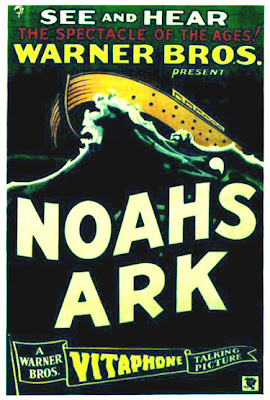 -
Part The Big Parade, part King of Kings, the film rather peculiarly parallels its modern age WWI romance with a biblical allegory, producing exorbitant amounts of large-scale destruction and a murky, feeble deduction between then and now.
-
As pure spectacle, Noah's Ark is pure fodder for people like me, but the fact remains that the film is awkwardly pious and poorly acted, whether recorded or not (the film does have a small amount of sound effects and spoken dialogue featured mostly in its mid-section, classifying itself as a part-talkie), for George O'Brien was certainly no John Gilbert. [C+]
Posted by Chase Kahn at 5:19 PM